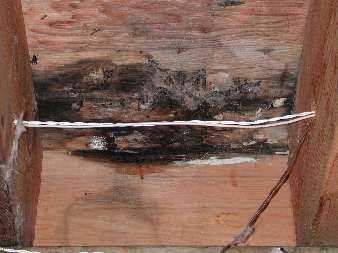 Stachybotrys is a genus of mold. There are many different species. The most notorious is Stachybotrys chartarum, known as black mold in the U.S. This mold is frequently associated with poor indoor air quality and water damaged materials. Click here for a post specifically about black mold.

During the last 10–15 years case studies have shown that people living and working in damp or moldy buildings have an increased risk of adverse health effects including airway infections, impaired immune function, bronchitis, asthma, recurrent airway infections, and extreme fatigue.

More recent studies show that Stachybotrys produces mycotoxins. Mycotoxins are toxic chemicals produced by many different molds. They are capable of causing disease and death in humans and animals. which are the cause of the most concerning health affects in people and animals.

Mold produces mycotoxins to make their environment better for growth and proliferation. They vary greatly in different genus and species of molds.

We know that Stachybotrys is a cause of disease in humans. Stachybotrys chartarum contains a higher number of mycotoxins than other molds grown in the indoor environment. It causes allergies and respiratory inflammation. Indoors, S. chartarum loves sheet rock, ceiling tiles and just about anything containing cellulose that has been exposed to moisture.

Moisture control are ventilation are critical in controlling the growth of Stachybotrys in residential homes and other buildings. The negative health effects of mycotoxins are a function of the concentration, the duration of exposure, and individual sensitivities. The concentrations experienced in a normal home, office, or school are often too low to trigger a health response in occupants. However, about 25% of the population is genetically sensitive to mold spores and mycotoxins. For these individuals, any amount of mold can be the cause of major distress and illness.

Your home is not the only place you may encounter mycotoxins. They sneak into our food chain as a result of fungal infection of crops directly eaten by people. They also get into our food through grains in livestock feed. Additionally, coffee and some spices (red chili, black pepper and dry ginger) are also found to be contaminated.

Mycotoxins greatly resist decomposition or being broken down in digestion. Even temperature treatments, such as cooking and freezing, do not destroy some mycotoxins.

The Toxic Effects of Fungal Exposure