Wadesboro, NC – Doug Lincoln and Linda Miller bought a house that has destroyed their lives forever due to toxic mold. Unfortunately, they are not alone. Just as thousands of others, they also thought a home inspection would have protected them, but it did no such thing.

Lincoln and Miller are still paying the mortgage on that house, but for seven months, they’ve been living in a tiny camper out back because the house started to make them sick. Lincoln said the house started making him sick the day he moved in about a year and a half ago. “I said there’s something drastically the matter with me throwing up constantly, headaches, and strange colds,” he said.

Lincoln and Miller spent months trying to figure out what was wrong with them and the house. Finally last September, approximately 10 months after they bought the house and paid for a home inspection — they discovered dangerous mold growing under the house was creeping inside. It had to do with an addition to the house that was made around 1987 and a swimming pool with a poor drainage system that led to moisture under the foundation. “There’s mold all over the house — all inside the house,” Lincoln said.

There was so much mold that a toxicologist the couple hired to inspect their house said it should be condemned and then either burned or bulldozed. The toxicology report found three specific kinds of potentially toxic mold: stachybotrys, aspergillus and penicillium. The report stated, “The air in your home is unsafe. Do not enter without full protective gear.”

The carpeting has now been ripped out and in nearly every room and mold is visible coming through the floors and baseboards. In the den, what looks like dirty footprints is actually mold coming through the carpet. Miller cannot take anything out of the house. Since they are contaminated. “All this furniture, all the brand new furniture we bought is gone,” she said. In addition, Lincoln’s insurance company has also refused to pay any claims, saying the mold damage came from long-time water problems under the house that aren’t covered by his policy, which appears to be a common stance among insurance companies nationwide.

Being denied help by the state and county, Lincoln and Miller live in the cramped quarters of a tiny camper with their life savings wiped out and nowhere left to turn. “We’ve been told this house has to be torn down. You can’t live in this house. The house is done,” said Lincoln. “We’ve lost everything we own,” Lincoln said he hopes others will listen and learn from what’s happening to him.

Several attorneys said the family could file a legal claim against the previous owners or the home inspector. So far, Lincoln said he has not been able to find an attorney willing to take his case. 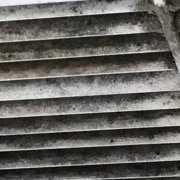