Sometimes individuals transform when they work together.

One example is single-celled slime mold, which takes on entirely new behaviors as a collective. Another example is a scientist and an artist collaborating on a museum event, combining their respective tendencies toward the fundamental and the abstract.

“I have trained my brain to think a certain way. I work in a very goal-oriented manner within the confines of physics,” said Kirstin Petersen, assistant professor of electrical and computer engineering, who was selected to work with artist Rachel Rose for Seven on Seven, a program that pairs artists with technologists and challenges them to create something new.

“Rachel showed me a very abstract piece of art, and I said, ‘I’m sorry, my engineering brain does not wrap around this,’” Petersen said. “And then she started explaining, and we started debating, and I think now we have converged on something that touches on the very foundation of our fields.”

Petersen and Rose presented their project – a series of collages created by Rose, with Petersen discussing the robotics technology that inspired them – April 27 at the New Museum in New York City. They were selected and matched up by the organizers of the event, which is produced by Rhizome, a new media arts group that is an affiliate-in-residence at the New Museum.

Rose based her collages on swarm robots that are, in turn, based on the behavior of slime mold. Petersen’s Collective Embodied Intelligence Lab focuses on simple robotic systems inspired by biology. Swarm robots are collectives composed of many rudimentary parts that are relatively easy and cheap to make, and can work together to perform complex and intricate tasks.

The individual amoebae in slime mold can’t do much on their own. But collectively, the organisms can form a shape that can move much faster through its environment, and assemble into a fruiting body that distributes spores to populate new areas.

“We have these incredibly simple creatures that together can exhibit an immensely intelligent behavior,” Petersen said. “It is the ultimate form of altruism – some will be sacrificed and die, but the rest survive, so how do they decide who gets to survive and why? That’s the amazing complexity that emerges from these systems.”

The robots her team is developing – which weigh less than 30 grams and contain magnets to attract and repel each other into shapes – may eventually be able to match the survival skills of the slime mold.

“Because our robots are flexible, they can interact safely with their environment and survive physical perturbations,” she said. “We are developing software to make these robots able to evaluate their collective health. For example, identifying which one is low on power or under the highest amount of strain. They’re going to have to reason about how to collaborate to stay alive, and when it makes sense to give up some modules for the greater good.”

Rose was intrigued by this concept, Petersen said.

“Rachel saw this and she got very excited, and she said, ‘OK, well, first of all on a high level, you have these swarms and you’re adding more and more artificial intelligence to them,’” she said. “As we do that, every individual robot is no longer the same robot. They all have different histories and opinions. So to her, it’s interesting to think that over time they might differentiate, and you suddenly have different robots with their own personalities.

“That can affect the swarm in different ways,” Petersen said. “They would sense and reason about their environment differently. And then what do you do? It’s a whole new level of complexity.”

Rose’s artwork addresses this complexity, including detailed images of what the robots, collectively, might eventually become. “It’s design at a very abstract level,” Petersen said. “It was very interesting to see the ideas this prompted.” 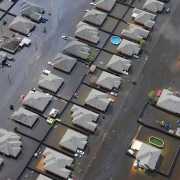 Protect Yourself Against Mold in Hurricane Season

Farmers Refuses Coverage For Houses With Past Water Claims