Tests showed blue mold spores were spread across nine acres on a farm near Cecilia, and can reduce yields if left unchecked.

The North American Plant Disease Forecast Center had not received any reports of blue mold in the United States this year as of Wednesday night. Blue mold is a fungal disease that eats holes through the leaves of tobacco plants.

Experts are unsure if the blue mold may be present in other parts of Kentucky, but at this point they believe there is no reason to panic. It is believed that mold spores may have been carried on the winds of Tropical Storm Arlene, which moved through the area this month.

A blue mold outbreak in 1996 cost Kentucky growers an estimated $200 million. The disease moved quickly through the state last year and had been confirmed in more than 40 Kentucky counties by the start of last July. But it did not significantly affect the state’s tobacco harvest. 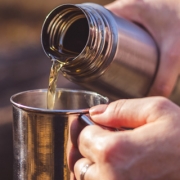 Black Mold in your Thermos?