Candida Albicans is an opportunistic pathogenic yeast that is a common member of the human gut flora. It does not proliferate outside the body. It is detected in the gastrointestinal tract and mouth of 40-6-% of healthy adults. Candida albicans is one of the few species of the genus Candida that causes the human infection candidiasis, which results from an overgrowth of the fungus. Several key symptoms indicate an overgrowth of candida, including oral thrush, recurring genital yeast infections, digestive issues and fungal infections of the skin and nails. 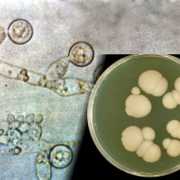 Candida is a yeast, which is normally present in the bowel. It feeds on sugars, simple carbohydrates and fermented products like alcohol and cheese. Everyone has Candida in the gut but the problem with it only occurs when the numbers gets out of control. Causes for this can be: too many antibiotics, a hormone imbalance (the pill is a major factor in this) stress and poor nutrition. These affect the balance of organisms in the gut and allow the bad ones to multiply.

Yeast are unicellular fungi. The precise classification is a field that uses the characteristics of the cell, ascospore and colony. Physiological characteristics are also used to identify species. One of the more well known characteristics is the ability to ferment sugars for the production of ethanol. Budding yeasts are true fungi of the phylum Ascomycetes, classHemiascomycetes. The true yeasts are separated into one main order Saccharomycetales.

According to a recent study from the University of Tokyo, as Candida proliferates in the intestines, it can change its anatomy and physiology from the yeast-like form to the mycelial fungal form. It is well recognized that Candida Albicans is a dimorphic (two shapes and forms) organism and as such can exist in these two states. The yeast-like state in a non-invasive, sugar-fermenting organism, whereas the fungal state produces rhizoids, or very long root-like structures, which can penetrate the mucosa, and it is invasive.

Penetration of the gastrointestinal mucosa can break down the boundary between the intestinal tract and the rest of the circulation and allow introduction into the blood stream of many substances which may be antigenic. Such things as incompletely digested dietary protein may be delivered to the blood through the portals of entry of the intestinal tract produced by the invasive mycelia of the fungal form of Candida Albicans. This may explain why many individuals who have chronic Candida overgrowth and a high percentage of the mycelial form of the organism commonly show a wide variety of environmental and food allergies. These incompletely digested dietary proteins can then travel into the bloodstream and exert a powerful antigenic assault on the immune system, which is seen as allergy, even producing a wide variety of effects such as cerebral allergy, with depression, mood swings, and irritability being a result.

Recent work from Dr. W. A. Hemmings in England and from the National Institute of Health in the United States has indicated that some of these incomplete protein-breakdown products, if absorbed, may have endorphin-like activity and can change mood, mind, memory, and behavior. These products have been given the name of exophins, meaning that they are produced outside systemic circulation and introduced into the blood by way of absorption across the CI mucosa.

The proliferation of the fungal form of Candida albicans would provide the route of absorption for these exorphin materials. The breakdown of the gastrointestinal mucosa can also lead to the introduction of the Candida organism into the blood stream and it can then find its way into other tissues, resulting in far-ranging system effects, including soreness of joints, chest pain, and skin problems.

It is not hard to see why Candida has increased during the twentieth century. The use of medicines, steroids, alcohol, sweet products has increased tremendously, even hormones are now fed to cattle and chicken. Unfortunately the presence of Candida in the body weakens the immune system, which has to try and cope with the toxins produced by the yeast. The yeast takes over and turns into a nasty mycelial form, which sends out mycelia or roots which invade the rest of the body. This is where the long-term problems start as unpleasant symptoms are produced in the part of the body that the yeast takes control of.

It is extremely important to know that the conversion of the yeast form to the fungal form of Candida is partially dependent upon biotin deficiency. Dr. Yamaguchi and colleagues have recently found that when biotin is added to the medium in high levels, it can prevent the conversion of the yeast form of Candida to its fungal form. They have also found that the fatty acid oleic acid seems to prevent this same conversion.

This concept has been used very successfully in conjunction with the Lactobacillus acidophilus culture to treat Candida Albicans. Biotin is given orally (1,000 mcg. taken three to four times daily) along with two teaspoons of olive oil taken three times daily, as a source of oleic acid. This is done along with a higher than normal fiber diet, using oat bran fiber, to increase the absorptive surface area of the fecal material and to hasten the elimination of metabolic by-products. This may have to be continued for a period of one to six months, depending on the severity of the infection and the length of time that there has been a Candida problem.

Once the organism is arrested in its growth and has been converted back to the yeast form, a program is then instituted to facilitate the healing of the gastrointestinal mucosa. This program includes higher levels of zinc (30 to 50 mg a day), vitamin A (25,000 to 30,000 units a day), vitamin E (400 to 800 I. U. per day), and Vitamin B5-calcium pantothante (200 to 1000 mg per day). The success of this program is determined by the improvement of symptoms, which could be everything from pan allergic syndrome to headaches, to acne, or menstrual irregularities.

Candida has also been linked to: mercury (amalgam) poisoning, diabetes, ME (Chronic Fatigue), Post Viral Fatigue syndrome, AIDS and Cancer. Like Candida, all these are linked with an inability of the immune system to cope.

Some yeasts are reported to be allergenic. They may cause problems if a person has had previous exposure and developed hypersensitivities. Yeasts may be allergenic to susceptible individuals when present in sufficient concentration.