A mold commonly found in water-damaged homes and buildings. Chaetomium has a cotton-like texture and usually changes colors from white to grey to brown and eventually to black over time. Chaetomium mold is usually found in a damp or leaking roof, basement or stink and may be recognizable by its musty odor. Chaetomium mold causes health effects such as skin and nail infections.

In some cases, it can produce mycotoxins that are especially dangerous to individuals with compromised immune systems. Because it grows in chronically moist conditions, it is important to repair the cause of water damage in your home. This means you need to be aware of where to find it. Chaetomium mold can grow in places such as your roof, basement foundation or leaky pipes. Cutting off the moisture problem at the source will prevent this mold type from returning repeatedly. 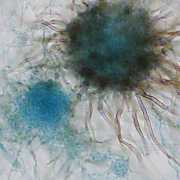 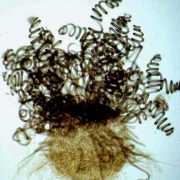 Commonly found on deteriorating wood products, chaetomium frequently emits a musty odor and is frequently found on water-damaged drywall and other lower cost construction products often used in the United States. It’s health effects have not been well studied, however some rare compounds have on occasion been identified as mutagenic. Currently, more definitive studies are being conducted with some rather distressing results.

Chaetomium are a common fungal species with a ubiquitous distribution with over 80 species currently known. Chaetomium colonies are rapidly growing, cottony and white in color initially. Mature colonies become grey to olive in color. From the reverse, the color is tan to red or brown to black. Fruiting structures of this mold look like olive-green cockleburs – 1/16 inch in diameter – that develop on compost. Although its heat tolerant spores survive 140 F for 6 hours, the mold appears only in compost improperly managed during Phase II, especially where Phase II ventilation is inadequate. Lack of oxygen when compost temperatures are greater than 142 F permits formation of compounds produced in anaerobic conditions. These compounds are toxic to spawn growth but are utilized by the olive green mold. It is highly cellulolytic.

A vast amount of medical news has been downplayed regarding Chaetomium in past literature. Chaetomiumspp. are among the fungi causing infections wholly referred to as phaeohyphomycosis. Fatal deep mycoses due to Chaetomium atrobrunneum have been documented. Brain abscess, peritonitis, cutaneous lesions, and onychomycosis may also develop due to Chaetomium spp.

Unlike most other mold pathogens, there is medical evidence to suggest that people who are exposed to Chaetomium may be predisposed to permanent neurological damage of the myelin sheath. Therefore, a noticeably high incidence of autoimmune diseases have been linked to exposure of this mold such as Multiple Sclerosis, Lupus, etc. It has also been linked to certain forms of Cancer.

As with other fungal exposure, it can also cause permanent DNA damage. This has been documented in several cases being researched during studies. Chaetomium is the only mold that inhibits cell replication.

Chaetomium are found on a variety of substrates containing cellulose including paper and plant compost. Several species have been reported to play a major role in the decomposition of cellulose-made materials. These fungi are able to dissolve the cellulose fibers in cotton and paper and thus cause the materials to disintegrate. The process is especially rapid under moist conditions.

This fungus is reported to be allergenic and a toxin. It is an ascomycete and in most species the spores are lemon-shaped. The spore column results from the breakdown of the asci within the body of the perithecium. The perithecia of Chaetomium are superficial and barrel-shaped, and they are clothed with dark, stiff hairs.

Chaetomium globosum produces the mycotoxin chaetoglobosin, which is reported to block cytoplasmatic division when the route of exposure is intravenous injection. Unfortunately, little data is available regarding inhalation of chaetoglobosin.

On a scale of worst to more mild in effects on human health, contrary to what many believe, chaetomium would be second or possibly third to aspergillus only to stachybotrys.

Chaetomium Kunze is a large genus of the Chaetomiaceae Winter (Sordariales Chad. ex D. Hawksw. & O. E. Erikss, Ascomycota) which comprise more than one hundred species (Arx et al 1986, Cannon 1986, Cano and Guarro 1987, Carris and Glawe 1987, Moustafa and Ess El-Din 1988, Abdullah and Al-Bader 1989, Horie and Udagawa 1990, Pande and Rao 1990 , Udaiyan and Hosagoudar 1991 , Abdullah and Zora 1993 , Udagawa et al 1994 , Gen and Guarro 1996, Decock and Hennebert 1997, Udagawa et al 1997), and are found in the most diverse substrates and geographic regions. Chaetomium species are characterized by superficial ascomata, usually covered with hairs or setae mainly surrounding a rather broad apical ostiolar pore, and attached to the substrate by rhizoidal hyphae.

Their ascospores are aseptate, brown or gray-olivaceous with one or two germ pores. During the course of a study of soil fungi from different regions of the world we have isolated numerous strains of this genus, some of them belonging to undescribed species. As with many fungi, new strains are constantly being recognized.

Mold is an insurance nightmare

Mold In the La Venezia Apartments

How Mold Ruined This Life