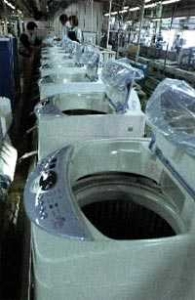 A mushrooming problem has gotten under the skin of the cleanest people, according to researchers. Mold spores proliferating in washing machines are apparently causing atopic dermatitis, which leads to skins rashes and other allergic reactions, and the problem intensifies each time clothes are washed, they said.

The researchers at the Osaka City Institute of Public Health and Environmental Sciences (IPHES) studied water samples taken from 153 household washing machines. The results were startling: 152 of the machines were contaminated with mold spores, Nobuo Hamada, chief researcher of IPHES, said.

In the worst case, 4,566 mold spores were found in 1 milliliter of washing water. The average mold spore count per milliliter was 61 for a single-tub automatic type, and 24 for two-tub machines, Hamada said.

The researchers point to a vicious cycle involving the mold spores. They said spores outdoors cling to clothes. When the contaminated clothes are washed, the spores attach themselves to the outer side of washing machine tubs. The mold then proliferates and develops new colonies on the tub. During the spin cycle, the spores are knocked off, but affix themselves on clothes in the tub, they said. This means that the more the washing machines are used, the more the mold proliferates. And more spores are released each time clothes are washed.

All is Not Lost, However.

“These types of mold are vulnerable to heat and can be killed by using water of about 45 degrees,” Hamada said. The institute a few years ago began receiving inquiries from dermatologists who suspected mold contamination in washing machines was behind the increase in atopic dermatitis cases.

Kazuyoshi Fukai, associate professor at Osaka City University’s medical faculty, who also specializes in dermatology, says he has long suspected that washing machines are not that clean. “There was a case in which atopic dermatitis disappeared immediately after the patient bought a new washing machine,” Fukai said.