Home sweet home is anything but that for Liz and Mike Coffey.

They have long suspected their home was not structurally sound. For more than two years, they have complained to Ryland Homes about the problems. Ryland insisted the home was just fine except for minor repairs, the kind to be expected in new construction.

Now, an independent engineer and Hillsborough County’s building department confirm that the problems are not typical and are wholly unacceptable.

“It affects you emotionally. The stress that it brings on, to even face that, it is a burden that I don’t wish on anybody,” said Liz.

The Coffeys paid Ryland Homes $312,000 to create the house in which they always dreamed of living. But what they got is a home that Hillsborough County and an independent forensic engineer call structurally unsound.

The rock facade falling off the front, the mold throughout the house, the unusable fireplace and the leaking pipes are just the minor problems the owners can point to.

They fear for their family’s safety because the second floor slopes, is uneven and in some places gives too easily under the weight of the average sized adult.

The Coffeys suspected the home had problems from the very beginning and spent thousands of dollars to confirm it when they hired an independent structural engineering firm, Bracken Engineering. The engineers found the second floor is sagging by almost an inch in some places and continues to drop.

For more than two years, Ryland denied the problem existed. In a letter dated August 16, 2001, Ryland wrote, “all repairs to the trusses at time of construction were repaired and inspected.”

A month later, Hillsborough County issued a citation against Ryland for the improper installation of the second floor trusses.

“Well, we fully intend to hold Ryland responsible for correcting the truss repair. Whether or not the Coffeys allow them to do that is another issue. We have an open code case. It will remain open until the condition is corrected,” stated code inspector Tony Clayton. 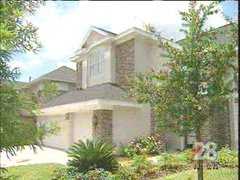 The Coffeys are fed up with the fight and fed up with the house. They’re packing their bags moving out. But they can’t put this house on the market; given its current condition, that would be illegal. They also think it would be unethical and unthinkable for them to try to unload the house onto some other unsuspecting family.

28 Investigates checked the Better Business Bureau and state agencies and found only a few complaints against Ryland Homes in Florida. That’s pretty extraordinary given they build about 1,000 homes in the Tampa Bay area each year.

However, they have compiled numerous complaints in the 14 other states they build in, including Arizona, Texas and Colorado.

The Coffeys suspect there are so few complaints because the problems with Ryland homes are well concealed and Ryland homeowners are in the dark. The company just started building homes here in 1996 and the Coffeys fear homeowners will just now start seeing problems.

Ryland insists the independent engineer and the county are wrong about the trusses and the soundness of the Coffeys’ home. While Ryland rakes in millions of dollars from Tampa Bay area consumers, their local offices refused to comment; instead, their corporate headquarters issued a written response to our questions.

“Ryland stands behind the quality of all our homes. If there is ever a problem, we stand ready, willing, and able to promptly fix it,” the statement read.

That has not been true in the case of the Coffeys. Mike and Liz claim they have been deceived and defrauded by Ryland and at this point will not let anyone from the company onto their property.

Despite the incredible financial burden, the Coffeys are buying another home, will have to pay two mortgages, and will wait for their day in court.

The state Department of Business and Professional Regulation is in the second phase of an investigation of Ryland Homes. The state’s board of engineers is also scrutinizing what went wrong.

28 Investigates will let you know what they conclude and what actions they take.