Tests on mold samples that state officials collected at an Elsmere apartment complex indicate a variety of molds, some of which can cause allergic reactions and infections.

“The mold was not only extensive in its growth, but there was a large variety,” state toxicologist Gerald Llewellyn said, referring to the preliminary findings released by the state’s Division of Public Health. “Probably one type of mold has grown on top of another.”

Division staff members collected the mold samples Oct. 10 from basements at Fenwick Park Apartments, where town and health officials found extensive amounts of mold in basements. Officials condemned all but one of the complex’s 39 buildings, and about 650 residents were forced to find lodging elsewhere because of fear the mold could cause health problems.

Heidi Truschel-Light, a spokeswoman for the Division of Public Health, said the preliminary results of tests on floor tile from the basements indicates “the presence of deteriorating asbestos.” Asbestos fibers, when inhaled, can cause various breathing ailments including lung cancer, the Centers for Disease Control and Prevention said.

Health officials last month cited other problems in the basements, such as open sewer lines, traces of bug and rodent infestation, and faulty wiring.

Tests on the mold, conducted by an independent laboratory in Cherry Hill, N.J., detected the presence of stachybotrys chartarum, Llewellyn said. “That’s one of the ones people have a lot of concern about,” he said, “but it was at fairly low levels.”

The CDC said there is no scientific proof that stachybotrys chartarum, the greenish-black so-called “toxic mold,” causes extreme health conditions.

Another mold type the lab detected in the Fenwick Park samples, Aspergillus, can infect lungs, particularly in people with weakened immune systems, the CDC said. It was among the most widespread of the molds found at Fenwick Park, Llewellyn said. Exposure to aspergillus can also lead to allergic reactions such as sinus inflammation, the CDC said.

About a dozen molds are identified in the Division of Public Health’s synopsis of the lab report.

All molds produce spores, which can cause allergic reactions or respiratory infections, Llewellyn said.

The elderly, infants, people who are sick or have a compromised immune system are susceptible to health problems caused by mold spores. But because of the large amount of mold at the apartments, officials fear even healthy people could experience problems.

“The great area that was covered was even more important than the kinds of the molds, because it was so extensive,” Llewellyn said.

Llewellyn said he has recommended that the town of Elsmere contact apartment owner Elsmere Park Club and request more widespread tests, including bulk mold sampling, air sampling and swabbing of all apartments and hallways. He also said the town should ask the owner to develop a plan to remove the mold and asbestos.

Regina O’Neil, vice president of property management at the apartment complex, said Thursday that Elsmere Park Club had not received notification of the lab results. She would not comment further.

Elsmere Town Manager John Giles said he had not seen the lab findings either but plans to act on the state’s recommendations.

“We want to know the extent of the problem in all of the buildings,” he said. “And we want to see a remediation plan that will eliminate any risks. That may mean phone calls and discussions with the apartments, and we’re more than willing to do that,” he said.

George, who moved in with relatives in Wilmington after leaving the apartments Oct. 7, said her 12-year-old son, Marquis, was having allergy problems when they lived at the apartments, but those have cleared up since they moved out.

“He hasn’t had the running eyes or anything like that, the tightening of the chest,” she said.

But George, who lived at Fenwick Park Apartments three years, said she has recently suffered health problems that developed after she moved.

“I had to have an asthma treatment Tuesday,” she said. “I’ve never had anything like that before.”

Black Mold in Prisons is a Growing Problem

NIOSH Has Tools to Identify Dampness, Mold in Buildings 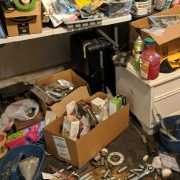