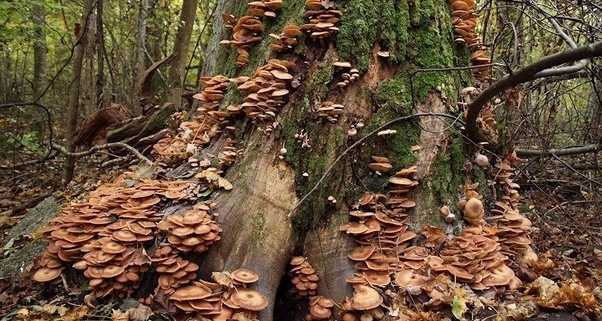 It’s bigger than an elephant, bigger than a blue whale, the largest organism on earth may not be what you expect. Introducing the biggest mushroom in the world, armillaria ostoyae or as it’s been fondly nicknamed the Humongous Fungus. Covering 2,385 acres of Malheur National Forest, Oregon, it’s our largest organism, and from the way the fungus has been growing, it may also be our oldest organism. Humongous is estimated to be around 2,400 years – 8,650 years old.

Discovered by scientists mapping the population of Armillaria in eastern Oregon, the team used the genetic material of the fungus to determine where one fungus started and the other ended.

The ostoyae is quite harmful to the surrounding conifer trees in the US and Canada. Attaching itself to the tree roots via hyphae- fine filaments that tangle together and leak digestive enzymes. This variety of fungus has the ability to extend rhizomorphs, that bridge gaps between food sources and expand fungi’s perimeter. Essentially the mushroom will feed off the tree roots and in the process killing the trees it’s attached to.

The expanse of the forest and the stable environment has enabled the fungus to spread as far as it has. Known as honey mushrooms, for their yellow cap and sweet, fruity bodies they are benign in nature.

The discovery of the giant mushroom has again sparked what constitutes an individual organism. However, it is agreed that if a being has a set of cells that are genetically identical and communicate to each other, it can be classed as one single organism. So the blue whale and the Humongous Fungus both fit the bill. Even the button mushrooms you buy from the grocer for your spaghetti carbonara are bigger than you think. In fact, a large mushroom farm will contain mushrooms so genetically identical, the cluster can essentially be classed as one genetic organism. Biochemist Myron Smith of Carleton University in Ottawa, Ontario explains:  SO IN A LARGE MUSHROOM-GROWING FACILITY THAT WOULD BE A GENETIC INDIVIDUAL—AND IT’S MASSIVE!

The map below shows the size of Humongous Fungus in red, while other patches of Armillaria are in yellow.

BY LULU MORRIS MAY 16, 2017 for National Geographic Magazine