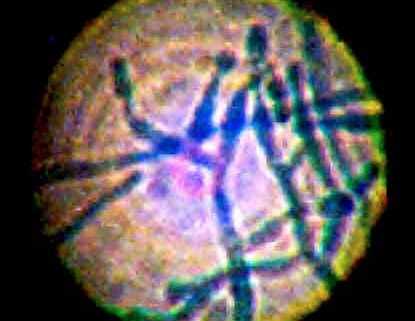 An allergenic mold type with five different subspecies. It’s generally white in color with green patches. Trichoderma mold colonies grow rapidly as wool-textured clusters and then become more compact over time. It commonly grows in the home on wet surfaces including within wallpaper, carpet and other damp fabrics. It thrives in moist areas, and so you may also find it in air conditioning filters and HVAC system ducts where there is a buildup of condensation.

While most trichoderma molds are non-pathogenic, other types have been linked to pulmonary and even hepatic (liver) infections. When it produces mycotoxins, trichoderma acts similarly to stachybotrys. Trichoderma is also extremely damaging to building materials. It contains an enzyme that destroy wood and paper products as well as textiles. This leads to rot and causes these structure to crumble. A trichoderma mold infestation must be dealt with professionally to stop the destruction of building materials and prevent further health hazards.

Green mold caused by Trichoderma harzianum is characterized by an aggressive, white mycelium causing a soft decay. Masses of spores that eventually form are emerald green, if left untouched. Heavily infested patches of compost are barren. This is currently the most important disease in the U.S. agricultural industry. Many farms spread salt on the compost in affected areas when green mold is first recognized. Strict sanitation is essential. Shelving, trays, walls, floors, etc. may be surface disinfested as a matter of routine, but it is done with a sense of urgency following an outbreak of a disease.

Many commercial products are available for cleaning surfaces. The base ingredients in these materials include chlorine, iodine, phenol, or quaternary ammonium, among others. Surface disinfectants are used farm-wide, from equipment sanitation to room washdowns to foot-dip solutions to picking basket prewash. Other green molds may be better defined as indicators since they don’t seem to be as aggressive as T. harzianum.

These species of Trichoderma also sporulate on the casing surface and may sporulate on infected mushrooms. These fungi indicate that carbohydrates are available, possibly due to inadequate nitrogen supplementation during Phase I or undercomposting. T. viride reportedly produce toxins that dissolve mushroom cells walls. A wet compost low in ammonia prior to pasteurization, flies, poor sanitation, anaerobiosis, and other factors influence green mold. These fungi are common in sawdust and commonly occur in the production of specialty mushrooms.

Trichoderma is often mistaken for Penicillium or Aspergillus molds (and vice versa), being that all three look very similar and are not easy to tell apart without the use of a microscope. Most Trichoderma strains have no sexual stage but instead produce only asexual spores. However, for a few strains the sexual stage is known, but not among strains that have usually been considered for biocontrol purposes. The sexual stage, when found, is within the Ascomycetes in the genus Hypocrea. Traditional taxonomy was based upon differences in morphology, primarily of the asexual sporulation apparatus, but more molecular approaches are now being used. Consequently, the taxa recently have gone from nine to at least thirty-three species. Most strains are highly adapted to an asexual life cycle. In the absence of meiosis, chromosome plasticity is the norm, and different strains have different numbers and sizes of chromosomes.

Most cells have numerous nuclei, with some vegetative cells possessing more than 100. Various asexual genetic factors, such as parasexual recombination, mutation and other processes contribute to variation between nuclei in a single organism (thallus). Thus, the fungi are highly adaptable and evolve rapidly. There is great diversity in the genotype and phenotype of wild strains. While wild strains are highly adaptable and may be heterokaryotic (contain nuclei of dissimilar genotype within a single organism) (and hence highly variable), strains used for biocontrol in commercial agriculture are, or should be, homokaryotic (nuclei are all genetically similar or identical). This, coupled with tight control of variation through genetic drift, allows these commercial strains to be genetically distinct and nonvariable. This is an extremely important quality control item for any company wishing to commercialize these organisms.

So far as the author is aware, different strains of Trichoderma control every pathogenic fungus for which control has been sought. However, most Trichoderma strains are more efficient for control of some pathogens than others, and may be largely ineffective against some fungi. The recent discovery in several labs that some strains induce plants to “turn on” their native defense mechanisms offers the likelihood that these strains also will control pathogens other than fungi.

Life cycle Fungal thalli are shown in the figure at the beginning of this web page. The organism grows and ramifies as typical fungal hyphae, 5 to 10 ?m in diameter. Asexual sporulation occurs as single-celled, usually green, conidia (typically 3 to 5mm in diameter) that are released in large numbers. Intercalary resting chlamydospores are also formed, these also are single celled, although two or more chlamydospores may be fused together.

Trichoderma spp. possess innate resistance to most agricultural chemicals, including fungicides, although individual strains differ in their resistance. Some lines have been selected or modified to be resistant to specific agricultural chemicals. Most manufacturers of Trichoderma strains for biological control have extensive lists of susceptibilities or resistance to a range of pesticides.

These versatile fungi are used commercially in a variety of ways, including the following: Foods and textiles: Trichoderma spp. are highly efficient producers of many extracellular enzymes. They are used commercially for production of cellulases and other enzymes that degrade complex polysaccharides. They are frequently used in the food and textile industries for these purposes. For example, cellulases from these fungi are used in “biostoning” of denim fabrics to give rise to the soft, whitened fabric–stone-washed denim. The enzymes are also used in poultry feed to increase the digestibility of hemicelluloses from barley or other crops. Biocontrol agents: As noted, these fungi are used, with or without legal registration, for the control of plant diseases. There are several reputable companies that manufacture government registered products. Some of these companies are listed at the end of this web page. This site will not knowingly list any nonregistered products or strains offered for sale in commercial agriculture even though these products are common and their sale is widely ignored by governmental regulatory agencies. Plant growth promotion: For many years, the ability of these fungi to increase the rate of plant growth and development, including, especially, their ability to cause the production of more robust roots has been known. The mechanisms for these abilities are only just now becoming known. Some of these abilities are likely to be quite profound. Recently, we have found that one strain increases the numbers of even deep roots (at as much as a meter below the soil surface). These deep roots cause crops, such as corn, and ornamental plants, such as turfgrass, to become more resistant to drought.

Moldy Foods - Research from the USDA

What if Nothing Works?

Another Family Sick From Sick Apartment