Detroit – Michigan U.S. Reps. John (Joe) Schwarz, John Dingell and Joe Knollenberg are among nine members of Congress who signed a letter dated March 1 to FAA Administrator Marion Blakey asking when the administration plans to remove the mold and whether it has spread since it was discovered in September. “You need to have a workplace environment that is free of environmental contaminants, whatever they might be,” Schwarz said.

FAA spokesman Paul Turk claims, “We will be responding to it with a very complete answer as soon as we can. We do have a great deal of information of what was done and when.”

Schwarz claims he did not feel the mold problem posed a safety risk to travelers. The FAA detected the mold in September during its annual safety inspection of the tower. Sugent said some of the mold is still visible and the FAA hasn’t done enough to deal with the problem. He said that air-traffic controllers aren’t allowed to take decongestants, which really only disguise the toxigenic aspects of many molds, because of the potential side effects.

He argues that the FAA should be just as worried about reactions to the mold.  “We’re a safety-oriented business, and they haven’t done anything,” Sugent said.

Mold remediation is a very expensive and time intensive task that could cost hundreds of thousands of dollars, and many feel that the health effects of mold are being downplayed to avoid a costly removal process. In fact, Corey said the FAA has spent a paltry $15,900 to “correct” the problem, and is in the process of trying to find the source of the moisture that is causing the mold, which is usually the first step in remediation before removing mold. She also said the FAA has paid for the removal of some of the mold, mainly what was found on parts of the walls on the fourth and ninth floors that were stripped of their two outer layers, as contractors inspected the tower. The only way to effectively remove mold is to eliminate the source of water intrusion and then to remove all mold, including inside wall cavities.

Sugent said he hasn’t seen much action on the issue. He said mold could be seen on those walls as recently as last week. The FAA would not allow media into the tower, claiming security reasons. The mold appears to have started growing in two unventilated storage rooms and has spread to the hallways. Those rooms are near the tower’s elevator shaft, which Harbut said could help it spread.

Part of the clean-up has been rocky for controllers, who had to evacuate the control tower in January after a chemical was sprayed in the elevator shaft and the infested floors. Controllers complained of lightheadedness and headaches, prompting the evacuation. The air-traffic controllers on duty that day were evacuated for about five hours and worked out of an older control tower until later that evening. Sugent said a meeting of local FAA and union officials is slated for today to discuss the issue.  Everyone is anxious to see if the FAA will do the right thing and correctly remediate all of the mold and the moisture source. 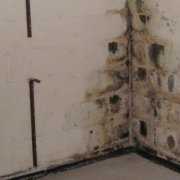