ST. PAUL, MN – Have you found yourself suffering shortness of breath, headaches, acid reflux or are you just not feeling quite right, but you can’t attribute it to any specific cause? Perhaps you’ve found it hard to concentrate and you feel fatigued easily, but haven’t been able to figure out why. If you live or work in a house or building that has been flooded, or has sustained water damage, these symptoms may be a sign that you are affected by ‘sick building syndrome’. Your environment may be toxic to your health, yet you probably have never even heard of one of the culprits, the fungus Stachybotrys chartarum. 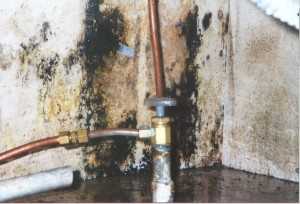 “It’s become notorious as a toxic fungus that can cause serious and permanent health problems in humans and animals,” says Berlin Nelson, a professor at North Dakota State University and a member of the American Phytopathological Society. “Over the past 20 years in North America, evidence has accumulated implicating this fungus as a serious problem in water damaged homes and buildings.” Since plant pathologists and mycologists have a wealth of expertise with fungi and molds they are able to help educate the public about home and building molds and specifically, the possible dangers of S. chartarum.

“The fungus is commonly found in homes or buildings which have sustained flooding, or water damage from broken pipes, roof leaks, sewage backups, condensation, etc.,” says Nelson. Spores of the fungus are in soil and are introduced along with flood waters or dust and dirt entering a building. The fungus is most common on the paper covering of sheet rock but can also be found on wallpaper, ceiling tiles, paper products, carpets with natural fibers, paper covering on insulated pipes, insulation material, on wood, and on general organic debris.

“Because leaks can occur behind walls and in covered ceiling areas, the fungus may grow profusely, but not be readily visible,” says Nelson. When seen, the fungus generally has a black appearance and will be slightly shiny if wet; a powdery appearance if dry.

If you suspect that the fungus, Stachybotrys chartarum could be in your home, follow these steps:

The American Phytopathological Society (APS) is a professional scientific organization dedicated to the study and control of plant disease with 5,000 members worldwide.

The Cost of Two School Improvement Projects Has Jumped $200,000