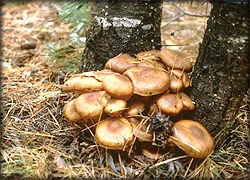 Honey mushrooms (Armillaria) are fruiting at the base of an infected tree in the Blue Mountains of Oregon. Seen in the fall, mushrooms are the only part of the fungi that shows above ground. Most of the organism grows underground.

Oregon State University announces that a fungus called Honey Mushroom has spread through Malheu National Forest. In the forest, located in eastern Oregon, Honey Mushrooms, which are fungi, have created largest living organism ever found. The mushrooms, which started as a single sport,  has spread  through the roots of trees and now covers over 2,200 acres.  The organism is estimated to weight 35,000 tons. Scientists estimate that the black shoestring filaments from mushrooms have been growing for 2,400 year.

The big problem: the fungi are killing trees as they grow. The honey mushroom started from a single spore too small to see without a microscope. From this first spore, the fungi has been weaving its black shoestring filaments through the forest for an estimated 2,400 years, killing trees as it grows.

Fungi has served an important purpose in nature for millions of years. It cleans up dead and decaying matter. But now, the gigantic mass of honey mushrooms are killing living trees. The fungi draws water and carbohydrates from the trees to feed itself. This process interferes with the tree’s efforts to provide water and nutrients for itself.

The huge size of the fungus may be related to the dry climate in eastern Oregon. These weather conditions favor spread of established fungi over new organisms.

This article was written by Jacob Jones for The Columbian. To read the article, click here.

Differences Between Fungi and Plants