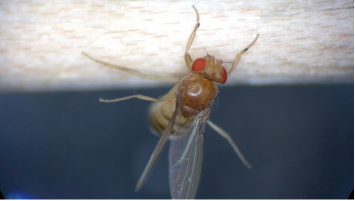 A fruit fly stuck to a dowel, thanks to the parasitic fungus inside it. The story of the misplaced virus — a discovery that Michael Eisen describes as one of the wackiest of his career — began with some plates of fruit.

In the summer of 2015, Carolyn Elya, a member of Eisen’s team at the University of California, Berkeley, began leaving fruit out in her backyard, in a deliberate attempt to attract flies. Predictably, the insects arrived. Unpredictably, some of them died in a strange way. When Elya found their bodies, their wings were erect, and a fungus was sprouting through their backs. She recognized the fungus as Entomophthora muscae, a species whose name aptly means “destroyer of insects.” It kills flies. And before it does that, it controls them.

When an Entomophthora spore lands on a fly, it grows into the insect’s body and begins devouring it alive, consuming the fat first and leaving vital organs till last. When the fly is nearly spent, the fungus compels it to do three things. First, it climbs to a high point. Next, it extends its mouth as if to lap up some food, but becomes stuck to its perch thanks to a glue that the fungus produces. Finally, it lifts its wings like a fancy sports car raising its doors. This is how the fly dies: innards consumed, face stuck, and wings out of the way.

It's a Moldy Story that Just Keeps Growing and Growing