An Oregon family suffers physical and neurological from toxic mold in their newly built house from Beaverton-based Adair Homes Inc.

Despite the attempts of many organizations and companies to stifle evidence contrary to the factual findings, it is becoming exceedingly clear that exposure to toxigenic mold can definitely cause permanent neurological, pathological, immunological and psychological damage.

This became increasingly apparent in a ground-breaking case last week in Oregon City, Oregon.  The decision is one of the first jury verdicts on mold in the Northwest, a spokeswoman for the Oregon Trial Lawyers Association said Monday. Nationwide, the issue has alarmed homeowners and has led to thousands of people becoming ill from mold, hundreds of lawsuits and billions of dollars in insurance payments, even though a  compensated and subjective government panel claimed last year that there is not enough evidence to link mold to these illnesses.  There has been a lot of controversy regarding the efficacy of this panel since these ?findings? were reported last year.

The seven men, five women jury only took one day to deliberate when they came back with an overwhelming agreement that the responsibility of the damages to the Haynes family were due to the negligence of Adair Homes.  A representative for Adair Homes said Monday that company officials wouldn’t comment until today on the verdict, which was entered Friday in Clackamas County Circuit Court.

The homeowners in the case, Renee and Paul Haynes, said they were not looking to build a manse on a hill or their dream home when they hired Adair Homes in 2001.  The older house they owned on five acres on Southeast Bornstedt Road was too small for the couple and their two sons, Liam and Michael, both toddlers at the time.

“We built it with sweat equity — we did a lot of the work,” Renee Haynes said of the new house. “We weren’t looking for something extravagant. We wanted more square footage. We were going from 1,200 square feet to 1,920 square feet, with four bedrooms and two baths. . . . It was modest.”

Framing on the new home occurred in December 2001, Haynes said, typically the Portland area’s wettest month. That year was no exception: According to National Weather Service records, 6.62 inches fell at Portland International Airport, and only five days out of 31 were without measurable rain.

The family moved in to the new home in March 2002.   “We were sick right off the bat,” Renee Haynes said. The lawsuit, filed in November 2002, said she and the children suffered from diarrhea, nausea, vomiting and respiratory problems.

Haynes said she called Adair Homes and was told that the mold was no big deal and that the issue had been overblown in the media. So the family continued living there, she said, because “we wanted to stay in our new house.”

In July 2002, while he was working around the home, Paul Haynes accidentally knocked a hole in one of the walls. Inside, the walls were soaking wet, Renee Haynes said.  By August, she said, her face was numb. Her two boys were later diagnosed with sensory integration disorder, which Haynes said makes them extremely sensitive to touch, even wearing clothes.

“They can take in stimulation, but they can’t organize it in their brains,” Haynes said. “My kids didn’t have this problem when we moved into house, but they have it now. . . . I’m convinced it’s because of the mold.”

When their health problems got worse, Haynes said, the family moved out and had no other alternative but to sue Adair Homes. Diane Dulken, communications director for the Oregon Trial Lawyers Association, said Adair Homes tried to settle the issue through arbitration.

Instead, Dulken said, a judge ruled that the lawsuit could go forward when the Hayneses’ attorney, Kelly Vance showed that an affidavit submitted from Marshall Lippman, the owner of Construction Arbitration Services in Dallas, Texas, was false and that Lippman had been disbarred for stealing funds from his clients.

Renee Haynes said she and her husband “used up all our good credit to pay our legal bills. We went to the wall on it.”   The jury ultimately found that Adair’s construction methods allowed mold to grow inside the Hayneses’ home and that it led to their medical problems. The jury awarded the family $498,418 for breach of contract and personal injury to Renee Haynes and her two sons.

“They built it wet and sealed it off,” Dulken said.  During the trial, Dulken said, jurors heard evidence of standing water inside the home’s wall cavities and the crawl space, leading to the growth of toxigenic mold.

Experts testified that Renee Haynes and her son Michael, now 6, carried mold antibodies in their blood. Michael spends the school day in a special classroom for the disabled, Renee Haynes said. Luckily, Haynes said, she and her family were able to move out of the new house and back into their old home before it was torn down.

“Most people in a situation like this have nowhere else to go,” she said. “They are either forced to stay, or they sell it to an unsuspecting buyer.”

Eventually, she said, they will burn their new house down. 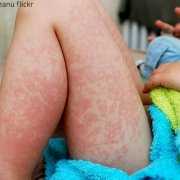 restorationmasterfinder.com The Health Effects of Mold on Children

Following a Natural Disaster, Before You Enter Any Moldy Site

Are employees getting sick from work?