Anderson, ID – Growing mold, collapsed ceilings and unsafe playground equipment are just a few of the complaints being levied by tenants at three Anderson apartment complexes.

Amy Bentley and her children lived in one of the Autumn Ridge apartments in which part of the ceiling collapsed last Sunday. Bentley and several neighbors complained to city officials that Pinnacle had not been responding to repair orders.

Anderson building commissioner Michael Widing told 6News that Pinnacle has been cited for violations at Autumn Ridge and two other complexes: Tower Place and Courtyard.

Some playground equipment was condemned on Thursday after a boy fell and was sent to the hospital. City officials said several bolts are missing from the equipment, making it unsafe. “There was other kids on it and it started shaking because it’s rotten,” said Charles McKinney, who saw the child fall. “He lost his footing.”

Several residents said they have a severe mold problem in their heating systems. “This has been going on for several months now,” said Angela Claybaugh. “They came in and puttied over all the mold and all the damage.”

The property manager at Autumn Ridge, Shoshana Strong-Williams, said she is not permitted to say much about the situation. “The comments that I am allowed to share are we have settled on a contractor and we have it set up to get the playground fixed,” Strong-Williams said. 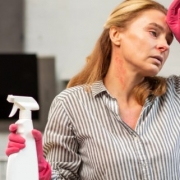