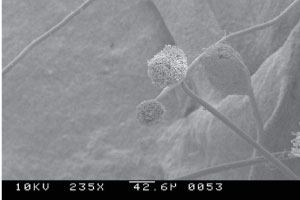 Image by WikimediaImages from Pixabay

Department of Health Services (DHS) reported the incident as Aspergillus mold, the same type of mold that caused previous illnesses and deaths. However, Children’s didn’t identify the mold as Aspergillus, contrary to what DOH described. It is not clear whether additional investigation by DHS is planned.

To read the entire article, visit the Seattle Times website.

The CDC report said the droplets produced by the humidifier were too large for the hospital’s ventilation system. This problem allowed for condensation and mold growth.

Mold sickness infected 14 patients, resulting in seven deaths since 2001. The most recent death on occurred on February 12, 2020. The system that circulates air through the operating rooms was initially thought to be the cause of the outbreak.

Note: Recently, Seattle Children’s Hospital filed a lawsuit to block the release of health records regarding mold outbreak. Mold-Help wonders how deaths starting in 2001 can be attributed to a condensation unit turned off around 2009. Evidently, it was infected prior to being taken out of service. Need for information!

Katie and Micah Hutt, parents of Beth Hutt who contracted Aspergillus during surgery, hope the lawsuit will spark real change at Seattle Children’s. They are frustrated with a system that left families vulnerable. Little Beth has spent her whole life at Seattle Children’s, undergoing her third heart surgery on 1/2/2020.

The suit alleges hospital managers have known since at least 2005 that a potentially deadly mold could be related to the facility’s air-handling system, but failed to remedy the problem.

Airborne Aspergillus mold problems persist at Seattle Children’s Hospital. This is the 2nd time the hospital has closed all 14 of its operating rooms due to mold.

Earlier this year the hospital replaced its air filtration system after aspergillus mold exposure caused the death on one patient. Five other patients were also infected. The State Department of Health is investigating.

The hospital is sanitizing its air filter system and deep cleaning the operating rooms. A spokes person said they’re monitoring patients who would be at high-risk to mold exposure.

More than a dozen years ago, Eugene and Clarissa Patnode realized a direct connection between the hospital’s air filtration system and their 12-year-old daughter’s Aspergillus infection that left her permanently disabled.

The family sued Children’s in 2005. Lawyers for the Patnodes gathered extensive evidence, including testimony from former staffers about the condition of air-handling units serving operating rooms. The hospital and the family settled in August 2008 for an undisclosed sum.

Now, Children’s is facing similar legal problems. The parents of a teenage boy sued the hospital late last month. They alleged the hospital “failed to take reasonably prudent measures to prevent Aspergillus from infecting” their son, leaving him disabled.

In recent years, Children’s has faced scrutiny from regulators over the steps it takes to guard against infections. In October 2017, inspectors with the state Department of Health cited the hospital for a serious violation over its failure to implement an effective infection prevention program.”

To read the entire article written by Paige Browning and published by KUOW.org, click here.

Cleanup Gets Mold Out Of High School

Toxic-Building Mold Has Grown in the Nation's Capital

Another Family Sick From Sick Apartment