OHIO – The Tuscarawas Valley is prime for mold and mold-related illnesses in the wake of recent high water and flooding conditions.

Just ask Bob Bennett, owner of Farsight Management Inc. of 6790 Middle Run Rd., Dover, who deals with mold on a professional basis. Or ask someone who claims to have experienced the effects of mold, such as Annette Kerns of 6475 Columbia Rd NW, Dover.

“I see lots and lots and lots of mold,” said Bennett, whose business provides specialized inspections and removal of mold growth in residential and commercial properties. Bennett said he sees mold growth generally in homes with high water conditions for an extended period of time. And it is possible that he will be seeing more from the recent flooding. Bennett said he has seen the scary kind, known as ?black mold,? but it only accounts for about 5 percent of the mold he has dealt with.

“When people talk about black mold, they’re talking about stachybotry,” he added. If a homeowner attacks his mold problems early, he is not as likely to get black mold. Bennett recommended that all building materials be dried within 48 hours of exposure. “That stops general mold growth, and stachy (short for stachybotrys takes several weeks to develop,” he said. He said a mold problem’s age can be determined by the kinds of mold that are seen. “Stachy is one of the later ones,” he added.

The breathing in of mold spores is the primary route of exposure for anyone living in a mold-infested environment, according to Bennett.

“t’s sad, to say, but my house was killing me. I believe that was happening,” said Kerns, who blames her recent three-week illness on mold growth in her house. While no one has confirmed that Kern’s house had black mold, Bennett said it doesn’t have to be black mold to cause health problems.

“It is the quantity (of mold),” Bennett noted. “You can take any kind of mold found in nature, and increase the amount you are exposed to and you will have a reaction,” he said. “Black mold gets the headlines, but people are suffering from the other kinds, primarily aspergillus and penicillium.” Bennett added that there are probably 20 or 30 common molds found when a person’s home has water damage. “And any can give the hayfever-type reaction.”

While Kerns did not experience flooding in her house, she said the moisture buildup came primarily from an infrared, ventless gas heater that she had in the basement to cut down on heating bills. The ventless heater kept the house so warm that its regular furnace, which circulates heat throughout the structure, didn’t have to operate. Moisture built up “and the mold went crazy,” Kerns said.

She became ill shortly after she began using the ventless gas heater in early January, after she saw moisture accumulate on the inside of the home’s windows, and on the ceilings upstairs. Kerns said she developed a sore throat, had no energy and was nearly exhausted. Then her migraine headaches began. She said she lay in bed for two weeks, too tired to do anything. “I was assuming that I had the flu, but it just wouldn’t let go,” said the 42-year-old.

She finally started researching the causes for her problems on the Internet. And what she came across was a great deal of information about mold, and mold-related illnesses. Convinced that mold was causing her problems, she purchased a mold test kit from a local store and got a sample of the mold growing in a Petri dish. She took her sample to the Tuscarawas County Health Department, but said her claim of black mold was immediately rejected and the doctor she spoke with didn’t want to discuss it. Kerns finally decided to turn off the infrared, ventless heater and let the furnace take over the heating chores. After that her symptoms lessened, she got out of her house for a day and her recovery continued.

She said she finally was able to return to work Jan. 31. While Bennett was not consulted about Kerns’ problems, he said it sounds like mold could easily be the culprit. The classic symptoms for black mold (stachy), he said, are bleeding sinuses, memory loss, flu-like symptoms, fatigue, and muscle aches. Bennett said he, himself, has suffered flu-like symptoms after having done mold assessments without using a respirator. He’s also experienced exhaustion, muscle aches and pains, and hayfever.

When a person exposed to mold leaves the environment, the symptoms generally dissipate, Bennett said. “But it could take some time,” he added. The primary question people should ask themselves if they suspect a mold-related illness, Bennett said, is “Do you feel better when you leave the house?”

Kerns and her husband, Robert, lived in the same house during the time it had mold, but he didn’t become ill while she did. Bennett said that is “very normal,” adding that “it’s all genetics.”

Once mold develops, Bennett said a person can remove it themselves with “soap and water,” and contrary to information published on several Web sites. “It does not require bleach.” But Bennett recommended that a person who removes mold should wear gloves, like dishwashing gloves. Mold, he said, has a heavy sticky spore and it’s not normally found in the air, unless it’s being disturbed.

In order to remove stachy from a surface without disturbing it, he suggested covering the affected area with the sticky side of contact paper, then cut the piece out. The drying of wet building materials also is real important and a heater and dehumidifier should be used. However, if mold can be on the wall, don’t use a fan because it could blow loose spores into the air. If the growth can’t be seen, a fan should be used to help dry the material.

Bennett said there are Environmental Protection Agency guidelines that state if the affected area exceeds 100-square-feet the mold removal should be done by a professional.

Iron Chlorosis Shows Up On Soybeans 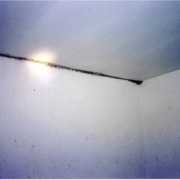 Potential Signs and Mitigating Factors of a Mold Problem

Atlanta, GA - The Centers for Disease Control, Along With the EPA, Have Been Under Rigid Scrutiny